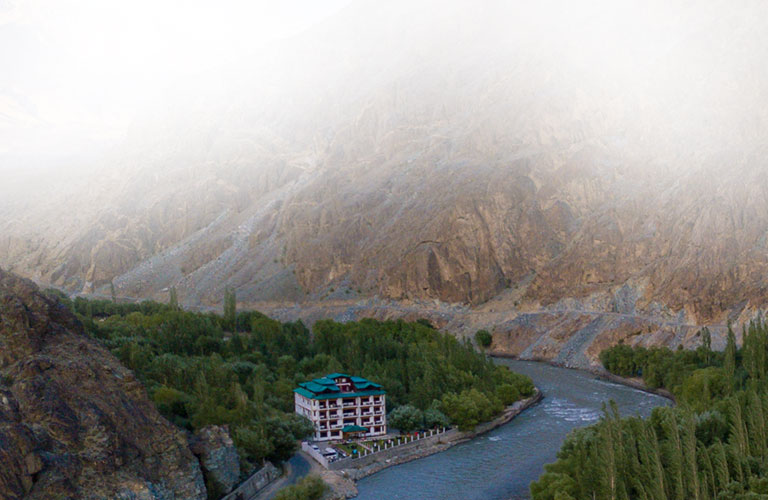 Two small, turquoise, high altitude lakes with camping sites, and views of the surrounding permafrost mountains are the highlights of the Penzi La pass, which is 160 Km from Kargil and at an altitude of 4,401 to 4,450 meters, the highest point on the Kargil – Zanskar road. This pass is more of a table land and, unlike the Zojila, has plenty of flat spaces and things to see, the Drang-Drung, for instance. Kishtwar is behind the mountains of the right. Zanskar being half way through the pass, some 35 km, after Rangdum. It is spread over more than 5,000 Sq.Km. Zanskar remains cut off from the rest of the world for more than eight months a year due to blockade of the Penzi La. Besides there are no air service. Today Zanskar is one of the least interfered with microcosms of Ladakh and one of the last surviving cultural settlers of Tibet. Put simply, systems such as polyandry, which are more or less extinct in Leh town and in the more advanced villages of Leh district, still survive in some pockets of Zanskar. In 1999 around a quarter of Zanskar still practiced polyandry. By then several shops and spring up in Padum and you could actually by things with money.

Mulbekh is 25 Kms ahead of Bodh Kharboo, as we travel on the National Highway from Leh to Kargil, but another way, it is 45 Km from Kargil. It is 190 Km, from Leh. The monastery itself has been built atop at high rock, 200 Mtrs. above the main road. It contains precious relics, however, right next to the road there is a 9 Mtr. deep relief idol of the Maitreya Buddha, carved out of a rock. This is the future Buddha. Maitreys is also known as Chamba. The sculpture dates to the time which the missionaries who brought Buddhism to Ladakh were from Kashmir, not Tibet, it was probably carved in the 8th century AD. This explains why where are shaiite influences in the Idol and the artwork in the monastery, which was built a few centuries later. There is a monastery at the other end of the valley. It is at the bottom of a large phallus-shaped rock. Wakha (Rigyal) is a twin village of Mulbekh. It has nunnery (Chomo-Gompa) – called the Jungchup Chosling monastry, very close to the highway. If you are traveling from Leh, Wakha comes just before Mulbekh, it is located in the Wakha river valley.

Dras War Memorial, also known as the Vijaypath, is a war memorial built by the Indian Army, located in Dras, in the foothills of the Tololing Hill. The memorial is located about 5 km from the city centre across the Tiger Hill. It is located on the Srinagar-Leh National Highway 1D. The memorial is in the memory of the soldiers and officers of the Indian Army who were killed during the 1999 conflict between India and Pakistan. The conflict later became known as the Kargil War.

“I loved the chutuk height hotel very much. We have stayed at several hotels on the strip but this one is now my favorite. The staff is very friendly, helpful, courteous and nice. The room was very clean and spacious. There was plenty of closet room and lots of hangers. There is beautifull hearthrobing fantastic suru River view.such a beautiful view I ever seen in this area.Iwill be staying there again on my next trip.”

“A wonderful property and very new at a fabulous location away from the hustle bustle and congestion of the main city in a quite corner by the water, the rooms are very nice and comfortable with good food and with staff and management always there to assist you. We had wonderful two nights there.”

“Good location.. Beautiful hotel opens to suru river.. Right beside its bank.. It has got a beautiful lawn where people can spend evening sitting having cup of tea and praising the beauti of kargil.. Rooms are good and spacious with all modern amenities.. Food is good.”

“Recommended by our dear Friend Rigzin ( Journey to Ladhak), this hotel, perched right on the river was the perfect start to our Zanskar adventure. Beautifully located away from the bustle, clean and comfortable, with staff that were obliging with any requests. A few housekeeping chinks but they will get these ironed out. After 3 days and a 10 hr return leg, the comforts of this hotel beckoned and we had a super last evening.”